Welcome to Anikio’s guide for finding rentals in Saskatoon near the University of Saskatchewan campus! Moving to a new city can be difficult, especially when it’s also the first time leaving home. Whether you’re graduating from high school or a parent helping your child find a place, it can be stressful. What areas are close? Or where can they take the bus from? Is the neighbourhood safe? And is rent in that area expensive?

To the right on a desktop or at the bottom on mobile, we’ve organized the search box by time to university. Select neighbourhoods you’re interested in as you read.

This guide is organized in three sections:

Guide to Saskatoon Neighbourhoods With Rentals Close to University 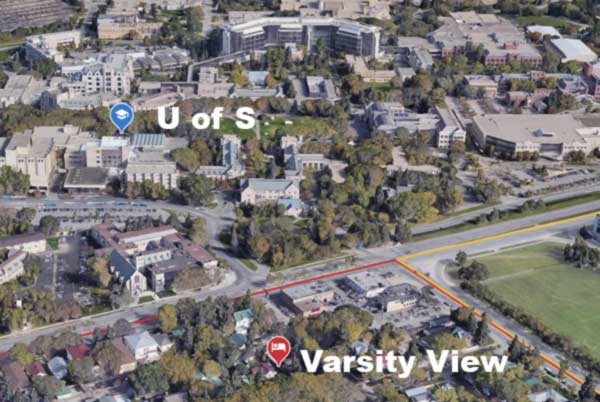 These are the best areas to find condo or apartment rentals in Saskatoon near University of Saskatchewan. We talk briefly about the character of the area and touch on getting to the U of S, rents, safety, and amenities. Each of those topics also has a more detailed section once you shortlist some neighbourhoods you’d like to investigate.

These two neighborhoods are located so near to university that rentals could almost be considered living in residence. As you’d guess, there are a lot of students living in the area and rents are typically reasonable for students. Nearby 8th St provides a lot of amenities from groceries to shopping and restaurants and is also walkable, or a quick cycle (though 8th St itself is not bike friendly). These areas would be considered quite safe.

Broadway Ave pumps the lifeblood into Saskatoon’s arts and alternative culture – although some of that is increasingly found in Riversdale also. The location – close to the trifecta of university, downtown, Broadway, and the river – makes it very popular and rents can range from reasonable to reasonably high. But there is a grocery store, lots of amenities from coffee shops to butcher/bakeries, restaurants, and nightlife with live music. Rentals aren’t near university but not too far, either. Walking to the U of S is nice but gets into the 20-30 minute range. Nutana has a low crime rate.

Sutherland and Forest Grove are two student rental staples just east of university and quite near. Some areas of Sutherland (near 108th St or Rutherford/Reid/Adolph streets) are walkable to campus. Otherwise, bike or bus is the way to go. Central Avenue in Sutherland has some character, restaurants, and amenities, but you’ll need to get groceries from Preston Crossing or University Heights S.C. While both areas are quite safe, the crime rate has been increasing slightly in Sutherland over the past few years.


University Heights houses the newest areas in Saskatoon with lots of university friendly rentals near bus routes. Evergreen is the newest among them that is university friendly (development is nearing completion). Aspen Ridge is newer still but lacks bus routes so far. All amenities are available including grocery stores. Rents are reasonable and properties are generally in good to excellent condition. There are many rental options but typical choices for students include basement suites, apartments, and shared townhouses. Walking is not an option but cycling, while a decent distance, can be done thanks to well connected trails. Do investigate bus routes prior to finalizing your choice. Because of the suburban nature of this area, unless you rent directly in the University Heights S.C. you will probably want a vehicle for errands. These areas are very low crime.

Stonebridge is one of the newer east-side neighborhood at the south end of Saskatoon. Rents are reasonable-slightly high but vacancy is low – so rents may have increased since writing. Many restaurants, grocery stores, and chains/big-box stores are in this area with a very suburban feel. Although at the edge of Saskatoon, the location is very well connected including to campus. Walking isn’t an option, cycling is possible but a stretch, but thankfully the direct bus routes get you to university in 25 minutes or so. Most likely you’ll be looking at condo apartments or sharing a townhouse. The crime rate is very low in Stonebridge.

Living in the downtown core offers an unmatched selection of amenities, arts, and culture. The Remai Art Gallery is world-class, the Persephone produces some excellent live theatre, there is a movie theatre, many excellent restaurant and nightlife options, and more. Rentals downtown will be in apartment buildings almost exclusively. Just north of downtown and directly across the river from the university is City Park, which is very much the same but a little further removed. Finally, north of City Park is North Park which is quieter and has a more suburban feel. In these two areas you’ll find shared housing (rent and get roommates) and basement suites. Modern suites are typically less expensive elsewhere but older character suites that haven’t been renovated can be quite reasonable.

All three areas are walkable in 25-40 minutes; University Bridge or the pedestrian walkway on the Rail Bridge (33rd St) connect into campus. In terms of safety, care should be taken downtown at night, particularly around the Lighthouse, but most times is quite safe especially compared to other centres. City Park and especially North Park are quiet, safe areas.

Riversdale is too far to walk to university and even bus times are 20-25 minutes. So why list it in a list of neighbourhoods with rentals near university? Riversdale has been undergoing a renaissance, and is included here because of its increasingly trendy food and art scenes. There are some great restaurants, downtown and various amenities are still close, and there is a board game cafe and two video game bars. Unfortunately, with the relocation of the Farmers’ Market, there is not much for groceries. Safety is improving but care is still advised in the evenings, especially as you get to the western edge of Riversdale. Rent tends to be high thanks to the trendiness.


Caswell Hill is also stretching the term ‘near’ university a bit, but thanks to nearby Saskatoon Polytech (SIAST), still has a large student population with lots of rentals and shared accomodation. Oh! And the lowest rents of those on this list.  Located just west of City Park, there are many character homes (so older rentals) and a lot of amenities on nearby 33rd St including a grocery store. Downtown, Idylwyld, and Riversdale are all near enough also. Cycling to campus along the 33rd St path is definitely do-able, buses aren’t convenient unless you’re near enough to 22nd St to catch a direct bus. For the west side of Idylwyld especially, Caswell Hill is one of the quieter west-side neighbourhoods.


The final areas on the far but close enough end of the spectrum, these two northern Saskatoon neighbourhoods offer lots of amenities from restaurants to grocery stores and shopping at Lawson Heights Mall. Lawson, like most of the major malls, has a bus terminal for the area and several grocery stores. Check the bus route carefully because you will want to be near the direct bus to make the bus make sense. Cycling along the river trails to campus is pleasant and goes quickly. Safe.

Find Places For Rent Near University

Use this form to help narrow down your search. Neighbourhoods are sorted from closest to furthest.